Well, you must have heard what is going on in this country. Promise of billions of jobs. Jobs like waiters, belly-dancing and carrying bags.

Recently, OTAM (Outsourcing and Telecommunications Association of Mauritius) wants the government to removed restrictions for importing IT workers from abroad [1]. OTAM says the Mauritian Textile industry is a “success”. It’s a joke right?

“Take, for example, the textile sector. If we were to rely solely on Mauritians, the industry would not have encountered such developments and rapid growth.” 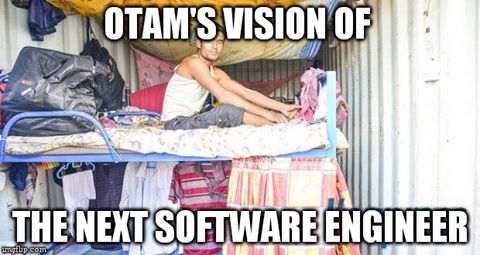 The government wants to legalize slavery in all industries. This article by l’express states [2]:

“That (the promised 665 dollars) is big money in Bangladesh and I was prepared to make any sacrifice for it,” Amin told slashslash who visited him at Ebene, in northern Mauritius, where he lives in a container provided by his employer, SmartCities Inc.

But, today, the Bangladeshi worker earns little more than a quarter of that amount. “I have been cheated,” he said.